I've spent the weekend reveling in having my older son home for Christmas break. 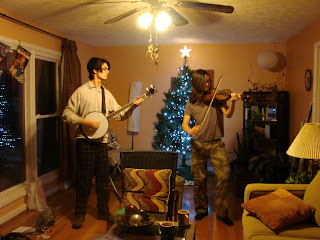 My younger son and I had picked out a white pine and put it up two weeks ago, and I put the lights on it, and then kept it watered and waiting until we were all here. I have the sort of household where an impromptu concert might break out at any moment. My younger son bought himself a violin and is teaching himself the Irish ballads he loves. My older son in turn bought a banjo, which he was instantly able to play as he is already proficient on guitar, bass and ukelele (and piano and saxophone, but those are a little different). I am convinced his brains are in his fingertips. 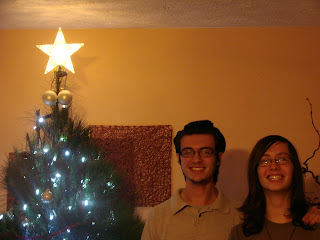 A moment of tree-decorating silliness, when they gave the star balls and insisted on a photo before I had them move the ornaments to other parts of the tree.  Incidentally, the are only an inch different in height, but my younger son was bare-footed and his brother had on boots. Today, my older son was telling me that if he could strike one fruit from the earth, it would be tomatoes. I asked about cantaloupes, a food he loathes. He said, "They  aren't fruit." "What do you mean they aren't fruit?" I asked.  He said, "They are Satan's testicles."  "What?!?" Straight-faced, he insisted, "Cantaloupes are manifestations of Satanic testicular spheritude." 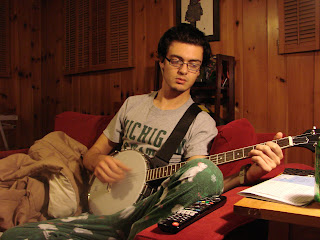 Still, I'm glad to have the kid home. It warms my heart to hear the boys talking and laughing together, and makes me happy to have him sitting here in the den with me, playing whatever instrument is at hand.
Posted by Secret Agent Woman at 9:38 PM