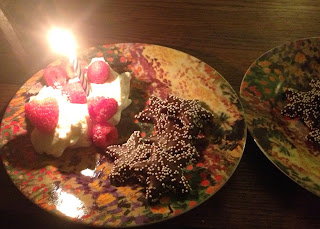 I had a social sort of few days.  One night, I made dinner for a friend's birthday - lemon shrimp pasta, salad, bread and coeur a la creme with raspberries and chocolate stars for dessert.  I had a heck of a time making the candle stand up in the cream on her plate, but what's a birthday without it? 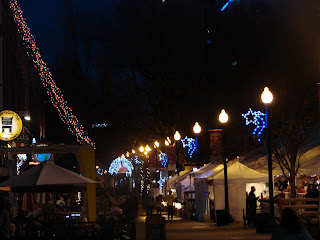 Another night and another friend had me heading downtown.  From Thanksgiving through New Year's, I think, there's a covered ice rink on the walking mall, and lights everywhere. I had time to kill, so I looked in the little stores and took pictures. 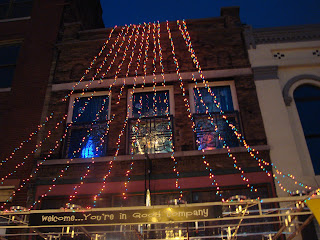 When I stopped in front of this pub, a man sitting at one of the tables outside smiled at me and said, "That's right, this is the place!"  I should have let him buy me a beer. 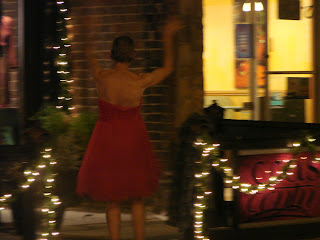 On the other side of the square, a man was caught up in the holiday spirit and danced to Christmas music on a boom box. Some of the ice skating kids had stopped and were watching him twirl in his strapless scarlet dress. 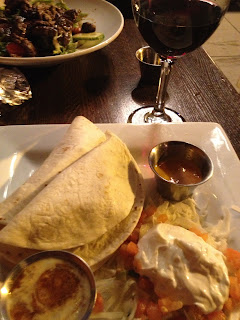 We ate outdoors. It was a beautiful night - never even warm enough to put on the jacket I'd brought with me. I got fish tacos and a piece of cheesecake. My friend and I split a bottle of a red zin-syrah blend and talked until they were shutting down. She and I seem to close places down when we meet - we never run out of things to talk about. 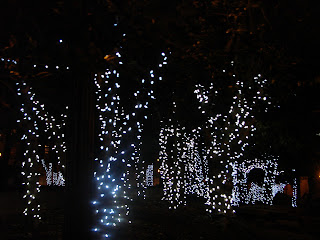