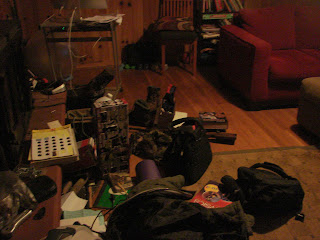 My younger son, still in high school, shuttles back and forth between his father's house and mine, swapping homes mid-week. When he arrives, school things get dropped in front of the wood stove in the den and that area becomes the staging ground for the week. Some powerful force field is created and my stuff (see the gym bag and yoga mat?) gets sucked in, too. But it drives me crazy. 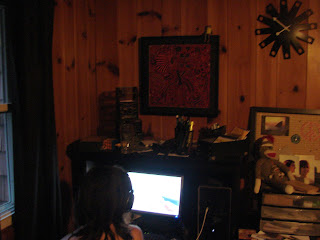 When he's not outside, my son is often at the computer, playing games, reading, doing homework or researching his latest project. Within a week the place is littered with cups and socks and a variety of papers and junk. 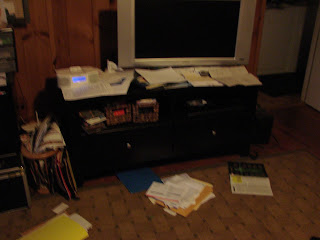 This room is where we watch movies and also where I pay bills, read, work on business paperwork, and have my own computers, both laptop and desk. When you add in my phone and iPad, I actually have four computers. I guess I'm a bit of a geek. Anyway, although we spend a lot of our time in this room - we're both in here now, in fact - it's hardly a serene place. It's probably the most cluttered room in the house. Have I mentioned it drives me crazy? 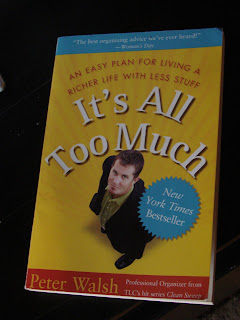 I noticed the UU church was having a course on clutter, but I found out too late to sign up. I bought the book and decided to work through it on my own. Ironically, on Amazon the physical copy was cheaper than the ebook. Cheap enough used that I decided to get the book even if it meant bringing another thing into the house.  Because that's the point of the book really - about our relentless acquisition of stuff and deep reluctance to part with anything once we have it. It's written by the organization guy on the show "Clean Sweep," but it isn't focused on organizing as much as divesting. I took the test and am actually pretty much mid-range. Most of my house is neat and I even enjoy getting rid of things. Still, I don't live as lightly as I'd like and I am looking to pare down in preparation for leaving this house in a year or so. 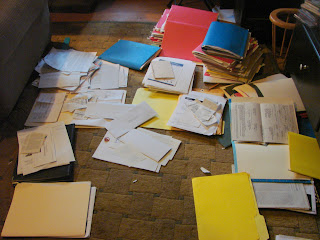 It has to get worse before it gets better. I collected up the piles of paper and emptied out the file cabinet. And then started purging.  All utility and credit card bills except the most recent, gone. Papers I wasn't sure why I'd saved in the first place, gone. I sorted and threw away and signed up for web statements from my retirement funds. I didn't need to set up a system for paying bills because the checks for those get written as soon as they come in and I already bank on-line. 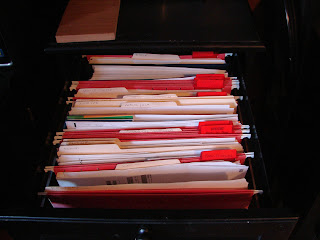 The revised system - lean and organized.  In addition to getting rid of a bunch of papers, I also dumped all the back issues of magazines in the recycling bin and put the magazine rack in the pile of stuff to charity. Along with several stacks of books and some games we never play. Everything that belonged in other rooms left and things that had no real use went into the trash. 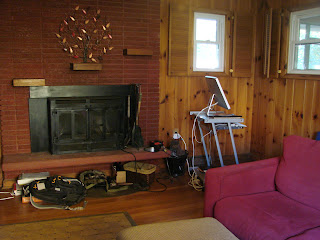 My son still has to use this room for school work and so I've left his backpack and school books, and also let him keep a few things here that shouldn't be stored in the basement. I'd prefer it to be clear of all that stuff, but I recognize that his needs have to take precedence for the time being. So it's not perfectly clear, but it is way better. 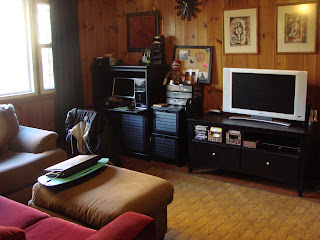 The book emphasizes that is in an ongoing process, not a one time deal. Another day, I want to pare down the CDs and store them in a less bulky way, for instance. But I'm pretty happy with it, and plan to make a sweep of the place at least once a week to keep us on track. Next up, I'll tackle another room in the house. But right now I'm going to drink my coffee and bask in the thing of beauty that is my den.
Posted by Secret Agent Woman at 11:54 AM