A little musical rant for the holidays. 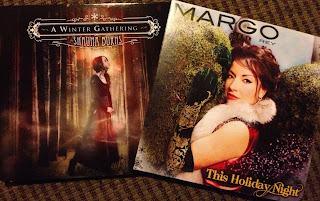 Woo hoo, I won a couple of Christmas CD's over at Lilly's Blog, and they arrived today! Adding them now into the rotation now. I don't remember how I found her blog, but I've been reading regularly since I did. And that was even before she gave me presents. Many thanks, Lilly!

And this brings us neatly to my topic: Christmas music I hate. You heard me. I'm not really a Grinch, but there are songs that get played this time each year that I just loathe. Tonight, I took my kids to a restaurant to save me having to cook (have I mentioned how this is a crazy time of year in my business?) and that awful song with the dogs barking to the tune of "Jingle Bells" came on.  It was new to my older son, and he immediately started laughing. He said, "Can you imagine the poor musician?  His boss calls him and says, 'Hey, I want you to make a remix of Jingle Bells using... (mimics inhaling on a joint)... dogs.'"  Later he started absent-mindedly singing to himself, "Bark, bark, bark... Oh my God! Worst. Earworm. Ever!"

In fact, I don't like any "funny" Christmas songs, and I don't reserve my ire for songs sung by dogs and chipmunks. "Grandma Got Run Over By a Reindeer" isn't funny. It's stupid. I don't know if it's mocking Southerners or just a redneck version of comedy, but I don't like it.

There is the entire class of songs that merge Christmas with sex that make me want to puncture my own eardrums. I like Christmas. And I love sex. But there is nothing sexy about Santa Claus. Nothing. I am actually personally repulsed by Santa Claus and I'd lay money on him being a pedophile. Creepy old guy inviting children to sit on his lap. So "I Saw Mommy Kissing Santa Claus" and "Santa Baby" make me physically ill.

Rock and roll Christmas songs, too. Ugh. "Rockin' Around the Christmas Tree"? No. Springsteen's version of "Santa Claus is Coming to Town"? Oh hell no. And "Jingle Bell Rock"? No, please, please, please no. And curse you, Billy Idol, for making a cover of this song and ruining your bedroom voice for me. I want "White Wedding" back, untarnished by the image of you looking smarmy as you sing this awful song.

Sappy Christmas songs. Wham's "Last Christmas," a whiny little song about being hurt in love. Oh, who hasn't been? Don't sing about it to me at Christmas, I'm having a hard enough time as it is. Paul McCartney's "Wonderful Christmas Time." I don't even know why I don't like it, I just don't. Or what about "Do They Know It's Christmas?" Look, it's great to raise money for famine relief in Ethiopia. I'm all for that. But I've got news for the Band-Aid folks - a third of that country's people are Muslim and there are a number of other religions (Judaism and Ba'hai, for instance) represented. So should they even know it's Christmas? How about we just help out and not push religion into it?

There is probably a special level of hell reserved for me just for saying this, but at the top of my list are songs by children. Don't get me wrong - if I go to a school program where kids are singing, I get as teary-eyed as the next person. But for the love of all that is holy, don't put them on the radio. And especially don't put them on the radio singing maudlin songs. "Christmas Shoes." Holy God. This one, if you've not had the misfortune of hearing it, is about a poor kid who doesn't have enough money to buy his bedridden dying mother shoes to wear when she meets Jesus. Because apparently Jesus would snub her if she wasn't wearing pretty shoes at the moment of her death. In bed. Honestly, what kind of Savior would that be?

So, you're asking yourself, what's her problem and doesn't she like any Christmas music at all? Well, yes, yes I do. Classics, for instance. I like Bing Crosby and Nat King Cole. Sue me. And I like instrumentals.  What's wrong with a nice acoustic guitar? And I like modern versions of classics that make them interesting. Like this cover, which sounds like it could have been recorded in Appalachia:
And old songs that you don't often hear, like this story of the shepherds responding to the call to go to the manger. (It's on the Kingston Trio's "Last Month of the Year" album, music that for me means all that is good about my family.)
And this understated, mildly jazzy version of "Greensleeves." If I ran a radio station at Christmas time, you can bet there would be fewer sappy/silly/icky songs and more of the sort that fill your soul.
Posted by Secret Agent Woman at 7:20 PM