A day in the life with my kids. 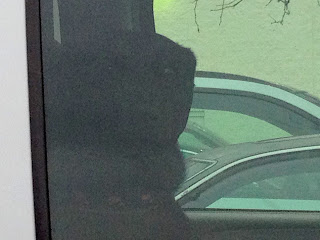 On the way to the guitar store, my older son was playing various types of metal music on his Macbook for my edification (not at my request). My younger son was in the back seat, occasionally commenting. I asked about one song, and this conversation occurred:

OS: "That's an interesting question. Some people would classify it as deathcore but it's really too melodic. So I'm going to call it melodic deathcore."

Me: "The Death Corps would be a good name for a deathcore band."
OS: "It really would. Do you know what this genre is?"
Me: "Umm.. Celtic metal?"
OS: "No, pirate metal. One of the weirder metals."
YS: "I think tungsten is one of the weirder metals."
OS: "There are not enough knees in the world to slap for that."
Me: "And what's that?"
OS: "Swedish Satanic black metal. Not to be confused with Norwegian Satanic black metal, which is entirely different."
Me: "Well, that goes without saying." 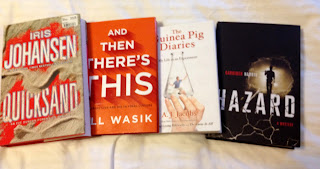 I elected to stay in the car, because the guitar store is loud and chaotic. But it was cold and I was bored. I had a staring contest with the poor dog in the car next to me. I think he was glad when his driver returned. When the dog had gone, I started texting everyone I knew to express my boredom and to say that I wished I had a book. Then I noticed a Dollar Tree. Everything's a dollar!  I find this a bizarre concept, that every single item in the store has been assigned the exact same value. But it was good news for me, because I found four books and a pair of reading glasses, all for five bucks and tax. I've since read the first one, a rather disturbing novel about a serial child torturer/murderer.

We ended the evening at a Chinese restaurant that my older son insisted was a favorite of his.  Except that they have lost their liquor license so I couldn't even get a beer to wash the mediocre-at-best food down. On top of that, my misspelled fortune declared that patience is my "alley."  I'm not sure if it's the same road that is paved with good intentions, but we all know where that leads!
Posted by Secret Agent Woman at 7:07 PM