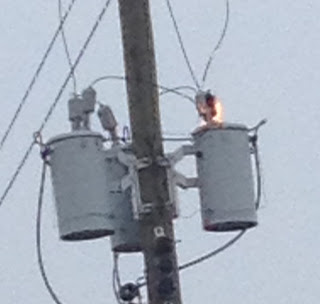 Although the holidays are a busy time in my business, the post-holiday season is often just a little weird. Maybe folks are feeling let-down or overwhelmed or realizing that they've over-spent. At any rate, therapy takes some unusual twists this time of year. Like the person who refused to re-schedule because I would not tell her I was okay with her cutting. Really - in what universe would you expect your shrink to say, "Sure, slice into your skin! What are razor blades for?!" Or when someone responded to my question with, "Duh!," he took offense when I quietly suggested that perhaps that sort of response might be the reason he has a hard time keeping friends. And I've had an unusual percentage of people showing up at the wrong time, convinced that I was in error until they found their appointment cards later. So when the electrical transformer next to my office burst into flames and knocked out the power this afternoon, I wasn't sorry to call it a day. 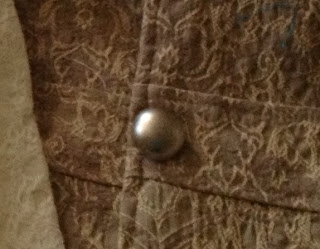 Until I get my motivation for big projects back, I'm concentrating on little ones. My sister had told me about an on-line clothing store based on an odd premise - they buy up small lots of clothing, offer them for a few days only at deep discounts.  You just have to check to see if there is anything in your size that you really like on any given day.  BUT, there are no returns.  To try them out, I decided to buy a blazer for work.   But I vacillated between two, adding them and removing them from the virtual cart while I made up my mind.  When the box finally arrived (their shipping system is a bit of a mystery as well), I realized I must have hit the order button with both in there.  Thankfully, they were very inexpensive, fit like they'd been made for me, and were different enough in cut that it wasn't a huge issue.  But they both had big ugly plastic buttons that were nicked. 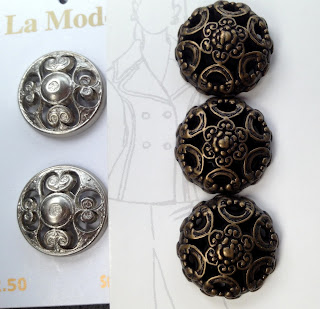 Next time I was in town, I went to a fabric store to get replacement buttons.  Who even knew there were so many different buttons to be had?  Literally thousands, in a dizzying array of colors and styles.  I fell into a stupor and wandered around with a photo of the jackets on my phone for 45 minutes, trying to decide.  There is such a thing as too much choice. (And yes, that's another metaphor.) 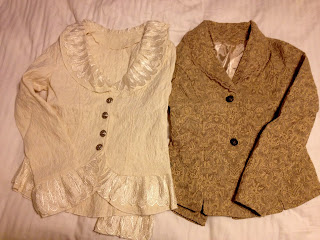 And sewing on those buttons is the only productive thing I did that day.  Today's task was un-decorating the tree and carting the bins down to the basement. Tomorrow, who knows?  I may even take the actual tree out to the road. Yeah. Winter just doesn't sit well with me.
Posted by Secret Agent Woman at 6:01 PM