A good day for using the oven. 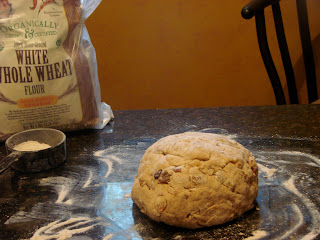 This past week, I read a post on the Molly Bawn Chronicles about making whole wheat raisin walnut bread, and I thought this cold weekend would be the perfect time to try it out. Step-by-step instructions are here on Molly's cooking blog. I rarely can get bread to turn out right, but I so love working with dough. I had this table made with scrap granite and it's the perfect surface for kneading bread. 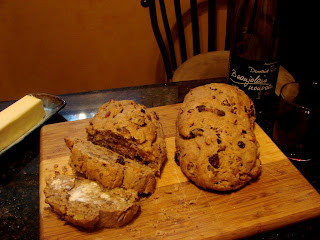 In spite of the fact that I am a notoriously poor baker, I made a few changes to suit ingredients I had in my house. For instance, I had a bag of whole white wheat flour instead of the regular kind of whole wheat flour. This is made with white wheat instead of red, so it's a little milder in flavor. It's not refined flour, though. Also, I subbed in regular dark raisins, currants and apricots for some of the golden raisins. Because I had them. And some pecans for some of the walnuts. Again, because I had them. And threw in chia seeds for no particular reason except that they are so healthful. My version has this ingredients list:

And you know, it is not only absurdly good for you, it is also delicious. We had some buttered with our dinner, but I think it would be good with jam or honey, as well. My son felt it had too many raisins, but I don't think that's possible. 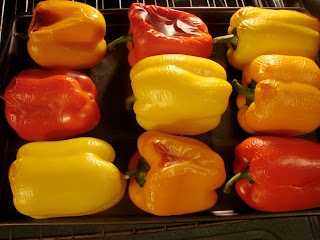 And while I had the oven on... the grocery store had peppers on sale for a buck a piece. Well. I know what to do about that. Into the oven they went, at 400 degrees, until the skins began to wrinkle and brown. 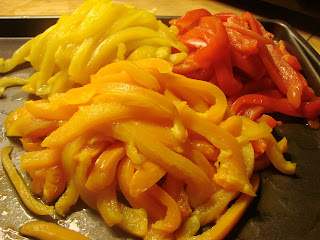 After they'd cooled a bit, I de-seeded them, removed as much of the skin as would peel off easily, and sliced them into strips. There you have it, roasted peppers for adding to recipes at a later date (to top pizzas, add to pasta sauces, use on fish, and so on). 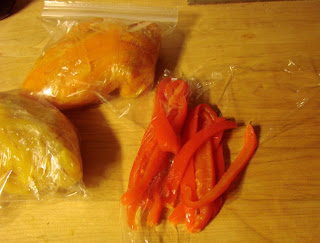 I wanted to freeze the colors separately but in small amounts so I could just get what I need to use. I decided to lay out sheets of plastic wrap and roll them up a small batch at a time, then pack the roll into a bag. Then, when I want to use them, I can just un-roll as many as I need. I was pretty pleased with that idea. Also pleased with the fact that even with all that cooking, I managed to get a nice long walk in at the lake. Sunny and high about 50 by yesterday afternoon - it was almost hard to remember we were covered in ice a couple of days ago.
Posted by Secret Agent Woman at 8:57 AM