Why I'm canceling my subscription to the local paper. 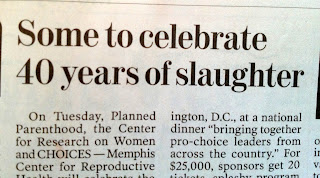 Not because they'll print anti-choice editorials, but because they'll allow such divisive, inflammatory titles for those op-ed pieces. I get it - free speech, blah, blah, blah. But when they print a headline-like title to an opinion piece and allow that sort of extreme bias in the language used, it gives credence to it as if the newspaper condones it. This is not news. This is one goombah's take on the anniversary of the landmark Roe v. Wade Supreme court decision giving women the right to govern their own bodies. Agree or disagree, leave out inane statement that some of us are celebrating slaughter.

And to clinch my decision to stop having the paper delivered to my office waiting room, today's paper had no mention anywhere on the front page of a little event called a presidential inauguration. And yet there was full coverage when Bush was inaugurated. Doesn't matter who you voted for, an inauguration is news. Right wing fuckers.
Posted by Secret Agent Woman at 5:57 PM